John Twycross demonstrated products from Mixamo the online 3D character animation company acquired by Adobe in June of this year. Mixamo’s products are expected to be included in Adobe’s Creative Cloud offering in the New Year.

Mixamo has products to Create, Rig and Animate 3D characters. John started by showing Fuse which is a modular 3D character creator with over 280 customizable attributes allow anyone to make a vast range of 3D character types and styles. John created a new character and showed how the character can be given required body features, clothing and footwear. The character can also be given action attributes from a database of animation clips, e.g. running, jogging and jumping.

Auto-Rigger is the Maximo automatic online rigging tool to build the skeleton and place the bones of the 3D character. The tool allows you to identify pivot points in the skeleton of the character, e.g. elbows, knees, neck etc. The product is a rigged character with skeleton and mesh weighted to bones that can be downloaded, scripted and included in your game. 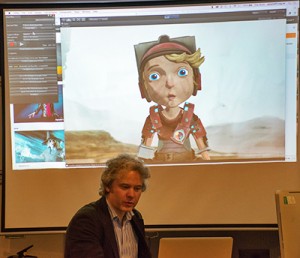 In the picture here John is working with the Face Plus product. The character on screen in real-time is following John’s movements through the web-cam on his laptop. In this way it is possible to create and record a scripted animation take with believable lip sync of the character.

Face Plus was made for Unity developers. Click the record button to capture facial expression, creating an ANIM file for your character. Then edit the 3D facial animation to get the exact result you want.