Matt Nicholson of Hollywood Drones and his colleague Danny MacGreggor Gill brought drones to our May meeting at Film Oxford and talked about the applications and challenges of deploying drones for aerial filming and photography.

Surveying, search and rescue, 3D mapping, building inspection and parcel delivery are just a few of the uses to which drones are being applied today in addition to the more usual aerial photography and filming. Numerous members of the meeting’s audience have drones of various sizes and capabilities.

Matt’s professional background is in aviation which made it easier for him to gain Civil Aviation Authority (CAA) permission to fly an Small Unmanned Aircraft (UAS) for commercial purposes. This permission required that Matt attend a 2 day ground school, plus theory tests on air law, operation of the unmanned aircraft and a risk assessment of flying procedures. In addition he was required to set up an Operations Manual to show how he intended to operate the aircraft. 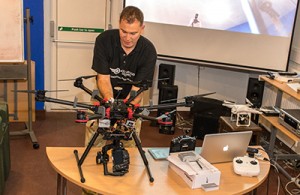 After discussing the CAA legalities of flying where the pilot is flying within line-of-site up to 500 metres distance Matt showed us his DJI S900 drone. This aircraft requires two-man operation, a pilot to fly the aircraft and an operator to manipulate the camera during flight.

Weighing in at more than 7kg the aircraft carries a GH4 Lumix Olympus camera. The GH4 operates on a radio-controlled 3-axis gimbal and imagery is monitored in real time on a radio connected tablet. Satisfactory filming with a drone was said to take up to three times longer than a ground based cameraman.

To demonstrate the capabilities of the S900 Matt showed a short film he had shot of the new maths building at Oxford University for HobsonCurtis Films.

Matt pointed out that CAA permission is not required for social flying of smaller drones providing that “the aircraft will not be flown close to people or properties, and you will not get ‘valuable consideration’ (i.e. payment) from the flight”. [source] 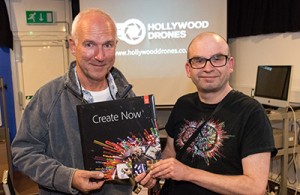