This month we had two very interesting talks and demos by members Sathya Vijayendran and Guy Henstock. 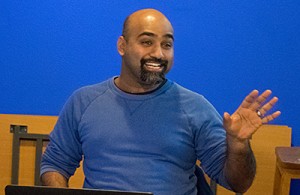 Sathya showed the title sequence he created for his comedy web series, “Robby’s Guide To Picking Up Chicks”. The sequence, based on a bathroom wall heavily covered in graffiti, showed animated images and text for the title. He had created this using both Photoshop and After Effects. In particular exploiting the layers in Photoshop that transition as layers when imported into After Effects.

In his demonstration Sathya created a simple version of the sequence by first starting with an empty image large enough to move around in for Super HD. Filling this empty image with a light background colour as a base, Sathya then went on to add an image of texture using partial opacity to blend the texture with the background colour. He continued to add layers of different opacity introducing items of graffiti on the wall, finally adding an image of a toilet roll holder with a small degree of drop shadow to complete the background of a bathroom wall covered with graffiti.

Saving the image as a PSD with all layers available in Photoshop, Sathaya imported it into After Effects where he proceeded to add text, this he floated onto the stage with various animated settings, including the introduction of an image. Sathya made various adjustments to the positioning and time line, as well as moving some of the Photoshop created layers, to get the desired presentation on the screen for his title sequence.

A great demonstration of the capabilities of Photoshop and After Effects working in partnership. Thank you Sathya, great job!

See the original video Robby’s Guide To Picking Up Chicks – Episode 1, “You’re More Important Than Her!” with the full title sequence. 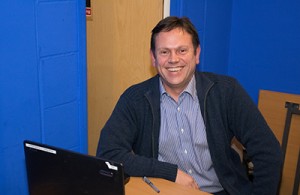 Guy  Henstock demonstrated how he had created the Business View of Film Oxford for Google Maps (view here by clicking on the front door).

He talked about how Business View is used by businesses to show visitors inside their premises using 3600 imagery. Google integrate Business Views into their Street View on Google maps.

Guy has become a Google Trusted Photographer working for Software Assistance. He talked about the extremely strict set of criteria that Google require him to follow when executing an assignment recording a client’s establishment. In particular Google require a very specific set of equipment to be used in a highly prescribed manner. He went on to point out that Google are working in partnership with photographers all over the world and obviously require consistency for their software and systems to work without issues.

He talked about how the images are taken using a fish-eye lens, shooting the first  image facing North, 10 feet away from the front door, with second image being 4 feet from the door, then 4 feet inside the front door. Images have to be submitted without editing, the process consisting of uploading to Google using Picasa. Google then perform an extreme quality control process, returning for re-shooting and submission, any sequence of images not matching standards.

This Business View service is new to Europe but very widely used in the USA. The inclusion of Business View sequences in Google Maps is thought to aid SEO rankings. Businesses also use the sequences in their own websites. To view Guy’s portfolio at Software Assistance  click here and scroll down the page.

Thank you Guy, yet another great talk and demonstration!