Thanks for all the Gelato Liz!   For our June meeting developer Liz Myers stood in at the last minute for Matt Gifford. Many, many thanks Liz.

Liz has been developing her app @2ScoopsApp which alerts users to the best gelato in shops in London, Paris, Rome and New York. The app works on geo location of the user’s phone and shows the details of gelato retailers, opening hours and contact details along with comments on the store and its products.

Originally from Minnesota, Liz worked in publishing for Microsoft where she switched to mobile development where she ‘got the bug’ before moving on to work for Blackberry. Liz is now an Adobe Community Professional and she outlined some of the announcements Adobe had made the previous night, particularly mentioning the Creative Cloud Photographer’s package and the student’s reduced rate for Cloud membership.

Turning to developing her app Liz pointed out the importance of using use cases as the key to design, deciding in this case that ‘find’, ‘enjoy, ‘share’ were some of the key uses of the @2ScoopsApp in addition to deciding the likely people who would be users, on what type of device and under what circumstances. In addition Liz commented on the importance of connecting the app to incoming Twitter feeds regarding the stores. Whilst displaying images and details of the products the app plays Italian voices to describe them in order to enhance the genesis of the gelatos.

Commenting on the development of the app’s code Liz stressed the importance of ‘test early, test often’. Liz suggested using jQuery Mobile for app development, stressing the importance of always using the latest stable version. In her development work Liz uses the Adobe Edge tools as they are tightly coupled with PhoneGap. In particular Liz mentioned the ease of multiple device testing using Edge Inspect which instantly propagates and displays on multiple mobile devices connected to the same mobile network the effects of code changes.

Liz showed her @2ScoopsApp and how through PhoneGap a user can scan a QR code to download and install the app. Thank you to Monica Messaggi Kaya who has posted on her blog a more detailed and technical report of Liz’s talk and demonstration. Liz’s blog at
myersdesign.com has much greater detail regarding @2ScoopsApp which is due to go into production live before the end of the summer. 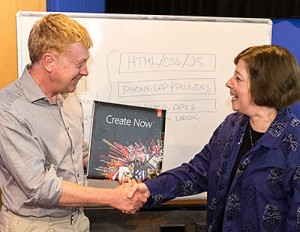 The final activity of the evening was to draw the raffle for a one-year free subscription to Creative Cloud. This was won by Roger Knight, congratulations Roger.