Great turn out of 30, which was surprisingly good as the the weather was really warm and  lovely. Quite a few new attendees including many local TV professionals. 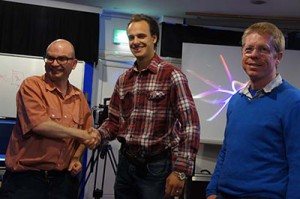 Richard kicked off with a brief look at how Blackmagic Intensity HDMI capture card can be used in stop motion capture, and edited in Premiere.

Martyn Chalk from Chalkstar films was a great speaker, he not only brought two of his Blackmagic cameras but he also brought his cameraman too so he could answer the very technical questions some of the audience asked. He also showed some of his companies work using the cameras, which they had only had for a few months.

Questions started off on the pro’s and con’s of DSLRs versus Blackmagic, through to post-production workflow, grading and lenses and customisation. One audience member brought in his own Blackmagic camera batteries that he had made!

There was a raffle for a years subscription to the Creative Cloud, thanks to Adobe. The prize was won by Luca Koch; and quite  a few went to pub afterwards.