This month’s meeting explored aspects of 3D in video, print and scanning.

After Effects and Camera 4D
Darius Dziala demonstrated the Maxon Cinema 4D integrated with the last release of After Effects CC. Objects and scenes from animation software CINEMA 4D can be used directly as footage inside After Effects CC without rendering first. This eases round-tripping between the programs and opens up numerous creative possibilities. Cinema 4D Lite is a cut down version which doesn’t have all of the Motion Graphics components but there are a few to experiment with, a great way to start working with 3D.

3D printing
Animation designer Natasha Warmingham of www.hiddeninferno.co.uk talked about the wide range of materials available for printing in 3D, such as plastic, metal, precious metals, wax, ceramics and sandstone. She showed a wide range of objects created by 3D printing for the film industry such as the suit for science fiction character Iron Man. It turns out that the Aston Martin used for all the stunts in the Bond movie Skyfall was a fully operational 3D printed model. In this way the real Aston Martin did not get damaged during filming.

Natasha has been studying 3D printing for over 2 years and amongst other tools uses Blender the free open source 3D animation suite to create her 3D characters. Printing the characters in 3D plastic Natasha sends her designs to www.sculpteo.com or www.kraftwurx.com who print the final 3D product and ship it back to her. Natasha presented for inspection two of her video game characters that had been printed in 3D.

3D camera and scanner
John Twycross, lecturer at Oxford Brookes University, has been working with 3D for the last decade. He brought along and demonstrated his Sony Bloggie 3D Camera. The tiny 5”x3” device has 3D video and still image recording capability, 3D viewing directly on 2.4″ LCD without the need for 3D glasses. It records 1920x1080p MP4 HD video w/5MP still images and has full-screen vertical/horizontal record/playback on a 2.4″ LCD screen. John passed the camera around for examination and experimentation.

John continued by demonstrating 3D scanning with an Xbox Kinect motion controller. He scanned a 3D model on a chair using the Kinect’s infrared projector and camera to capture and record the three dimensional coordinates. The interactive results were visible on the screen of the laptop to which the Kinect was connected. 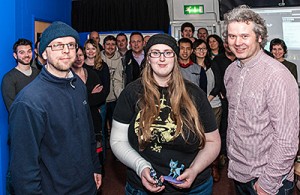