Listen to some of the sounds from last night on Soundcloud: 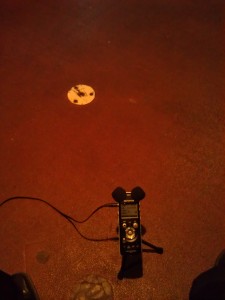 More sounds have been shared on the Soundcloud dropbox.

Malcolm Atkins kicked things off with a discussion and presentation of his scoring for several films. Listen to Malcom perform with Dubwiser next week, and get cheap tickets for Dubwiser supporting the Skatalites – 26th May at the O2 Academy – available at: http://www.dubwiser.co.uk/

Thanks to Jim Gwilliam for an excellent electronic track (Untitled).

Neil C Smith used his software, Praxis (download and use free on Google Code) to mix the tracks stored on the Soundcloud group dropbox – birdsong, footsteps, tracks from Tiger Mendoza (thanks Ian!), and Malcolm then joined in with some live improvisation. Fantastic set, thanks.

George Tsverik then played some kind of hardware (!) to modulate the saxophone of Ali Palmer Smith and the voice of Danny Nasirpour. Check out Danny on YouTube.

If you have any sounds you’d like to share, sign in to Soundcloud and add them to our group dropbox, or send them to us here, along with photos and comments of course.

Another reminder about this Thursday’s Global Soundcloud Day, in Oxford (that’s global, right?) RSVP on the Meetup page

Invited noise-makers will … make noises, talk about noises … and if you’d like to be an invited performer, just let us know now.

Even if you’re not performing on the night, send us your noises, music, now – simply add it to the Soundcloud Dropbox.

We’d like to welcome any first-timers, particularly those who found out about this event via the Soundcloud Global Day, or the new Meetup site for Digital Creatives.

Two Adobe representatives will help us celebrate the launch the CS6 release of Adobe products. We’ll be holding two raffles for a full suite of the new software, one for Digital Creatives Oxford, and one for the Premiere and Post group (refer to their site for the terms of the raffle, ours is out of a hat – but you’ve got to be there to win!).

Richard Curtis (@richardcurtis) will give a presentation and demonstration of the new Photoshop release with Touch applications and Creative Cloud, and Niels Stevens will do the same for the Production Premium release.

Note the new venue for this event: we’ll be at Headington Hill Hall, which is on the Oxford Brookes Headington Hill Campus, Oxford, OX3 0BP. More details after the next meeting.

Thanks, and hope to see you on Thursday!

Our next Adobe groups meeting, on Thursday May 17th, is a sound special. We’ll have some stickers and stuff from Soundcloud, and are organising a night of sonic entertainment.  For inspiration for our own event, read stories of what people got up to at last year’s Soundcloud Global Meetup Day, check this page http://blog.soundcloud.com/2011/06/10/gmd-highlights-may/

Do one or all of the following things:

Send us your sounds
2. Come and make sounds. Contact us or comment here if you’d like to perform and need more than a one-minute guerilla slot.

3. Come and listen. We’ll also be recording snippets over the evening to upload to Soundcloud, and invited performers will be entertaining you and themselves. Watch this space for news of our performers.

4. RSVP on our MeetUp site.

It’s free, but please bring your own drink!