Thanks to those turning out in miserable but essential rainy conditions last night. Here’s a summary of what you heard or what you missed.

Glenn Clarkson presented Creative Cloud news  – more to follow, but check the announcement on Tuesday, and the AdobeCreate site. Adobe’s YouTube channel has lots of answers too.

Dariusz Dziala talked us through some of the forthcoming changes and improvements in After Effects CS6 and Premiere Pro CS6. 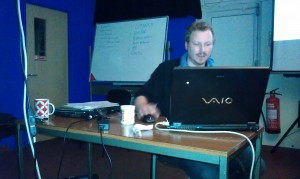 Next month, heads up, as it’s SoundClouds Global Meetup Day on May 17th. we’re inviting (via Meetup) any local SoundCloud fans, offering some SoundCloud swag and a chance to produce sounds and post them online.

Post your sounds to the Soundcloud Dropbox group here:

Send us your sounds

Exact plans are still being discussed, but save the date and practice your sounds daily. For now, you can RSVP on the MeetUp site.

Alun Ward will demo the Photoshop CS6 beta (get it here) and he and Glenn Clarkson will talk about some of the upcoming features in Creative Suite 6 and the Creative Cloud and their recent trip to the new Adobe HQ in Maidenhead.

Just to let you know, the full CS6 details, pricing and features for all products, will be officially announced on April 23rd. If you can’t make it to this meeting, check out Adobe TV for sneak peeks at the new features.

Dariusz Dzialia is going to talk mainly about upgrades to Premiere Pro and After Effects in CS6.

Dariusz is also going to say a few words about two new video applications – SpeedGrade for color grading and Prelude for ingest, logging and transcoding.

We also may have another video related speaker – but if not we’re off to the pub early!!

How much: totally free