For December, all three Adobe groups are meeting at the Royal Blenheim pub, St Ebbes, bang in the centre of Oxford.

That’s right, Digital Creatives, and Premiere and Post, and Flash, all in one room (or a couple of rooms, including the toilet).

Not only that, but Digital Creatives will be holding their raffle – names drawn from a hat – for $2,100 worth of Adobe software. Be there to win.

Wow. What a packed evening! Links and notes will be along shortly, but in the meantime here are a few headlines that I jotted down.

1. Thanks to Glenn for the Adobe News summary. 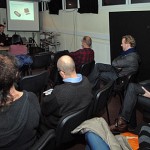 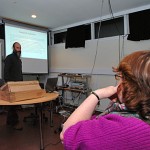 3. Peter Jones talked about his story with slitscan / timemorphing. Amazingly beautiful and sometimes horrific imagery! Full notes to follow also. In the meantime, check out John Whitney on YouTube and Douglas Trumbull’s stargate sequence from 2001.

4. Stavroula Kounadea talked about the interactions between director and actor. Although I don’t work with actors or directors, I’m still visualising myself as a sphere! 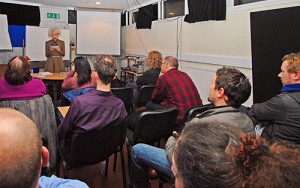 December meeting + raffle for all three groups: The Royal Blenheim, St Ebbes, Oxford, Thursday December 15th (see, I told ya’  it was the 15th!).

Next meeting exact agenda to be confirmed,but here’s a rough outline:

1) News from Adobe. There is news!

2) “Demystifying the camera” with Dariusz which will show how cameras are built, how they work, all the vocabulary related to the subject – both in the real world and in software applications (i.e. After Effects). There are a number of plugins in AE, Photoshop which use camera features (motion blur, lens blur, distortions etc.)

I will describe my personal journey into developing an effect I called Timemorphing and how I eventually discovered it was a form of slitscan. By using After Effects I will describe how to create a slitscan and show a variety of different effects that can be achieved. Than looking at the weird world of slitscan we will then discuss What’s slitscan good for.

Day: Thursday 17th November
Time: 7:30 pm.
Where: OFVM Film Oxford, 54 Catherine Street, Oxford, OX4 3AH
http://bit.ly/ofvm-loco
How much: Free
For whom: anyone interested in networking with other digital creatives in Oxfordshire

And the next date for your diary: Thursday 15th December – all three groups meet up for final meeting of the year, in a pub in Oxford city centre. More soon!