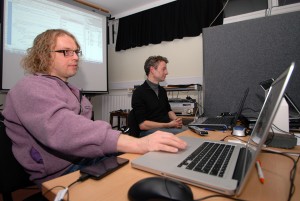 A good turnout to the meeting last night – thanks all for turning out and not even receiving an Adobe pen in return!

Dariusz led us off with a demo of some apps for use by filmmakers, mostly for his swanky Samsung phone which even connects to the project, ooh.

This led on to the news of Adobe’s new Touch Apps family, mostly concerned with tablet use where you can really use your finger to paint, prototype etc. Adobe’s catching up here a bit, as there are plenty of sketching tools around, most notably for me Autodesk’s fantastic Sketchbook Mobile. Get it!

A brief mention of Adobe Edge – After Effects edging into the world of HTML/CSS ! Download the prerelease free now.

Alun then talked through his experiences trying to get an app going for Android. Notes to this, with links to most of the software and help mentioned are now up on Google Docs. Warning – this is very shorthand!  This was part One of a series, next month I’ll be back with a bit more on how to make your HTML/CSS (Hybrid) App take advantage of the device. I like taking advantage of devices. 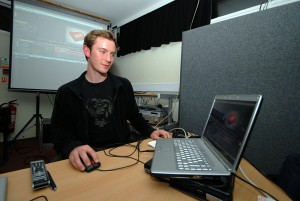 Richard Roaf then finished us off with a great talk on using cameras within After Effects for some neat effects. Here are the links to videos he demoed.

Our next meeting is at 7:30pm on Thursday 20th October at OFVM, 54 Catherine Street, Oxford.

It’s free, as usual, and we have a packed evening with:

Richard Roaf will talk about how to create a motion graphics project with Photoshop and After Effects and use the 3D function and camera function to create the appearance of 3D.