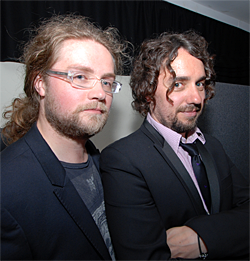 Thanks to Brothers McLeod for a great evening previewing their new pilot Isle of Spagg, a full half hour of animation – that’s a lot of blinking Flash frames! We were also treated to a 30 minute presentation from the  Greg and Myles (animator and writer respectively), walking us through the whole process of creation, from concept, holiday, sketching, drinking, through to working with actors and musicians, raising funding, and final production.

The Brothers talked of the three years it took to bring the Isle of Spagg to life. Greg told us that the idea for the film came some 10-11 years ago when they were in Cornwall and saw Monkeys Head Island. He said “I got to wondering whether there was a community on the other side [of the island]” and the idea was born.

Partially funded by the MEDIA Programme of the European Union the project started by the brothers “taking a week out of the office” writing and drawing, and generally trying to make each other laugh as they created the characters and drew up their animation bible for the film. Commenting on the process Greg said that they needed “to love the characters as a 30 minute film meant they would be a round for a very long time!”

Greg and Myles paid tribute to the production team:

Next month we’re taking a summer break, so we’re back at OFVM Film Oxford on Thursday September 15th.

In the meantime, if you have any ideas for a talk, or topic for the night, do get in touch. If you want us to approach someone who’s been an inspiration to you, in design, illustration, animation, the web, anywhere – we can make the approach for you, just let us know.

As a special offer for Adobe User Group attendees – sign up for this weekend’s Flash Animation course at OFVM at a 50% discount. That’s £72.50 to you!

Here’s some recent feedback from this course:

One of the best Adobe trainers I’ve ever come across. Eva
A great course that goes at a steady pace so everyone understands. Bruce
I think this is the best IT-based course I’ve ever done. Really good pace… Jenny

Read more details about the course on the OFVM web site. It’s suitable for beginners to Flash software and is an introduction to using it for animation, for video, and we’ll add basic interactivity using Actionscript. There are usually 8 or so students, so it’s a small and informal group with the opportunity on Sunday to pursue your own project work with the tutor’s help.

To get the discount, put ‘Adobe Group Member’ in the ‘please give details’ box when you book online.

If you want to chat to OFVM, call them on 01865 792731, or contact info@digitalcreativesoxford.com to ask Alun any further questions about the course.
This offer only lasts until noon on Thursday, so get booking!

BAFA award nominees, The Brothers McLeod, illustrator Greg and writer Myles, will be talking about their latest project, a half hour comedy pilot called The Isle of Spagg. They’ll be telling us how they came up with the idea, how they found the time and money to make it, and what they hope to do with it in the future. The talk will also include an exclusive screening of the finished pilot.
Greg and Myles visited us a year or so back and gave us a great night. Do invite your friends along to this and let’s make it a good evening. If you’re interested in animation and/or Flash, come along.

Day: Thursday 21st July
Time: 7:30 pm.
Where: OFVM Film Oxford, 54 Catherine Street, Oxford, OX4 3AH http://bit.ly/ofvm-loco
How much: Free
For whom: anyone interested in networking with other digital creatives in Oxfordshire