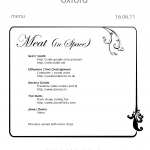 Neil talked us through his praxis framework – don’t forget, if you’re interested in creating interactive or generative artwork, you can download praxis on Google Code and give it a go, it’s all Open Source. Watch an excerpt from Sound Pool.

Tim Watts showed us some of his great experimentation with Flash recreating an existing image but with a beautiful particle effect adding a touch of randomness and personalisation to the original. What’s it for? When you start asking that question, you just know you’re making something interesting.

James Davies, a past raffle winner, walked us through the creation process in Flash, Premiere and AE, behind his wonderful videos for First Fold Records. Check the YouTube channel, and the First Fold website.

Dariusz Dziala and Efthymios Chatzigiannis demoed their VJing and audio collaboration, Synaesthetics. They also showed us how it’s all done, and finally, for those who could hang on, Dariusz, Efthymios and Neil jammed together, a world first, happening in Oxford!

Download the menu from last Thursday’s Meat in Space night.

The Brothers McLeod, illustrator Greg and writer Myles, will be talking about their latest project, a half hour comedy pilot called The Isle of Spagg. They’ll be telling us how they came up with the idea, how they found the time and money to make it, and what they hope to do with it in the future. The talk will also include an exclusive screening of the finished pilot.

We proudly present our high protein line up:

Bring your own thing to drink, unwind and listen to our artists.

Next Thursday (June 16th at 7:30 pm) sees the landing of Meat from Space. Well, okay it’s Adventures in Meat Space if you use our original title, or Meat in Space if you like the Muppets. 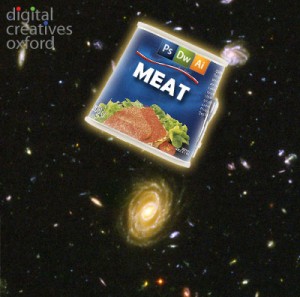 Neil C Smith will present praxis, his modular framework for live creative play with video, images, audio, and other media. Its primary focus is on the easy development of generative and interactive work for physical spaces, as well as live performance.

Dariusz Dziala VJs and presents some of his collaborative work with dancers.

If you are yourself crossing the tricky boundary between real and virtual space, as an experienced programmer, or as a performance artist, dancer, we still have 15 minutes left for you to perform or just test out your work in a friendly environment.

Bring a bottle, a can, a juice or a glass of milk, and settle down to listen and then chat.

The Adobe Premiere and Post group will be holding their raffle draw too, for $2,100 worth of Adobe software. Check the OFVM website for full details of how to apply to be in their raffle.